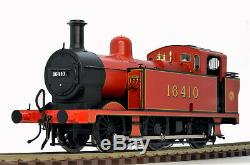 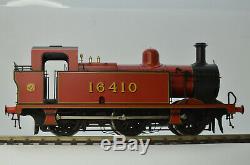 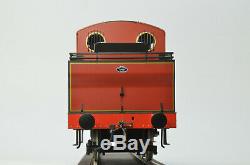 DCC Supplies Limited Edition O Gauge Jinty Fowler 3F LMS Crimson Lake 16410. Brand new in its original packaging.
This O gauge model is an exclusive, one-off edition consisting of only 300 models. Fitted with a 21-pin decoder socket the model is easily fitted with DCC or DCC Sound. This particular Jinty started life as LMS 16410 and was built in 1926 by the North British Locomotive Company in Glasgow. Originally allocated to Willesden, 16410 served at many different depots in its life.
In 1934 it was renumbered 7327 by the LMS. When the LMSR was nationalised and British Railways were formed, 7327 (then based at Willesden) became 47327. This was one of two Jintys bought from the scapyard by the newly formed trust (the other being 47357). It is a popular locomotive and has been painted in many colours in preservation, including lined LMS livery, as Thomas the Tank engine and most recently as S&DJR number 23. High Level of separately applied detail. Removable cab roof for ease of posing your locomotive crew. Push Pull fitted variants will be available. The item "O Gauge Jinty 3F LMS Crimson Lake 16410" is in sale since Friday, June 28, 2019. This item is in the category "Collectables\Model Railways & Trains\O Gauge\Locomotives". The seller is "dcc_supplies" and is located in Holt Heath. This item can be shipped to all countries in Europe, United States, Canada, Australia.