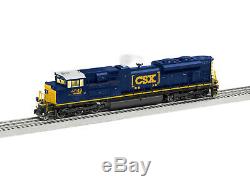 Easily among the most popular and widely used diesels of the modern era, the SD70ACe has found a home on railroads across North America on major railraods and even some smaller lines. Lionel is happy to introduce this locomotive in several new paint schemes as well as some familiar roads.

LEGACY® Control System equipped able to run in LEGACY® Control mode, in TrainMaster® Command Control mode, or in Conventional mode with a standard transformer. Bluetooth® Control - Operate with Universal Remote or LionChief App. Odyssey® II Speed Control with On/Off switch. LEGACY® RailSounds® sound system featuring. CrewTalk dialog and TowerCom announcements, each with different scenarios depending on whether the locomotive is in motion or stopped. Six official railroad speeds with CrewTalk dialog. LEGACY® "Real-Time Quilling Horn" control with instant response for realistic signature "quilling" and correctly timed warning signals. Single hit or continuous mechanical bell sounds. Sequence Control: plays the sound effects of an entire trip, including warning sounds and announcements, based on the movement and speed of the locomotive.

This item is in the category "Toys & Hobbies\Model Railroads & Trains\O Scale\Locomotives". The seller is "ectc" and is located in Lanesboro, Pennsylvania.

This item can be shipped to United States.