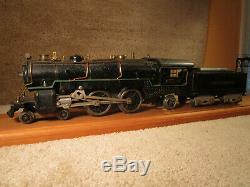 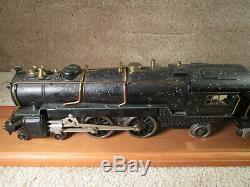 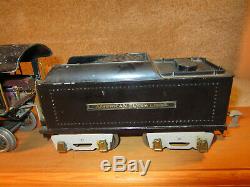 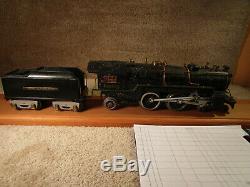 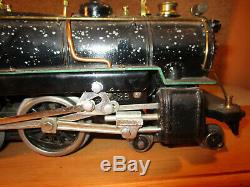 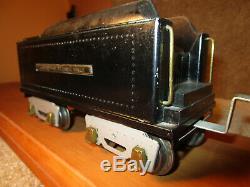 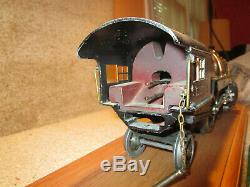 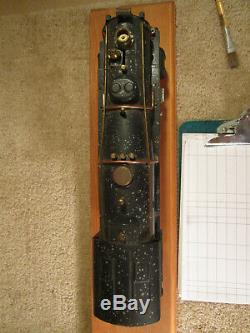 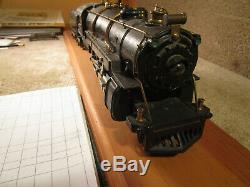 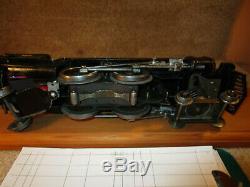 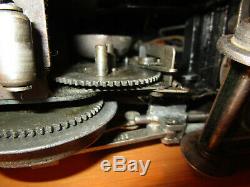 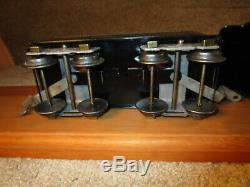 Be sure to take a look. I didn't get a chance to weigh this monster of a Locomotive, but it weighs a ton. Definitely takes two hands to lift it safely.
It is a 4-4-2 Standard Gauge Zinc Die-Cast Locomotive with Manual reverse. My best guess is that it is from 1932. It features the Triangular Valve Gear and Black Die cast Driving Wheels. It has a red working bulb under the Firebox and the Headlight is shrouded by part of the Die-cast eyebrow shade.
The manual reverse is operated by a vertical pull lever protruding from the top of the boiler. I understand some models made had an operating bell, operating from an arm protruding from the top of the boiler by the bell. This loco has the slot for the lever, but no lever is visible, so I don't know if it ever had one. I put this heavy loco on the track, fully expecting to be dead in the water, as I had never operated it in the 20 years I've had it. But to my SURPRISE it creeped forward about two feet before stalling, and when put in reverse, it crept back about two feet. I believe with some grease on the gears, and a little lubrication, this loco should perform! I will let the new owner have the fun of bringing her back to life. The green stripe is very visible down the side of the loco, but the overall paint on the loco has scattered dots of Paint Loss. I have no explanation on what could have caused that condition. The Trailing Truck is held on by a piece of bent metal that looks a little precarious. But Photos I see in the Greenberg Book seem to indicate that a similar connection was how they made it back in'32. Don't know if this little piece of metal is original or not. The 8 Wheel Tender is #4671 and it feels like it is Die-cast as well. Doesn't feel like Tinplate. It is in pretty good shape with Grey Trucks, and the Draw-bar is intact, as is the vertical pin and chain that connects the Tender to the Locomotive. AMERICAN FLYER LINES'' appear on the plates below the Loco Windows and the sides of the Tender. Flag holders adorn the front stoop on the loco. Take a good look at the pictures as they are an important part of this description. As always, THANKS for viewing our listings.

The item "AMERICAN FLYER STANDARD GAUGE #4692 4-4-2 Die Cast Loco with 4671 Cast 8 Wh. Tender" is in sale since Wednesday, July 8, 2020. This item is in the category "Toys & Hobbies\Model Railroads & Trains\Standard Scale\Locomotives". The seller is "straprailman" and is located in Chesterfield, Virginia. This item can be shipped to United States.