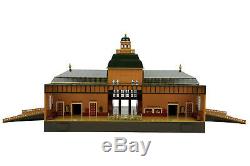 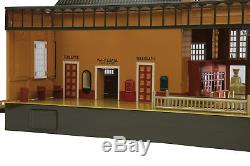 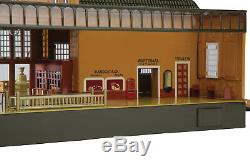 Works With Any AC Transformer. Unit Measures:13 1/2" x 9 1/4" x 10. In 1915, construction on Europe's largest terminal station was completed in the center of Leipzig City (Saxony).
The new Main Station was in fact, a double station operated by two State Railroads before they were merged into the German Reichsbahn. The structure was huge, measuring 298 m (326 yd) in length and featured platform access to 26 tracks. Naturally, this real-life station caught the attention of Märklin who wished to receate its essence for the world of models and toys. Though delayed by WWI, two designs of the Leipzig station finally appeared in the 1919 - 1920 catalog as O Gauge and I Gauge tinplate gems. The famous tin-plate masterpieces were featured in Märklin catalogs until 1930.
But no catalog indicated the name of "Leipzig". The official denotation was: "Grostadtbahnhof" (Big City Station) or "Bahnhof-Anlage" (Station Complex). However, architecture, style, and appearance left no doubt about the model's heritage: the "City" was meant to be "Leipzig". Of course a full scale model would have been impossible to recreate. A 1:45 reproduction would have measured 6.70 m (22') in length. In those years, the size of toy train accessories was not determined by an exact scale factor, but by the gauge and the size of the railways. A station had to match the track and the trains and it had to give an impression of the prototype. And it had to show the harmony of the original by incorporating unique details of real life and play value within the world of toy trains.

And the incognito "Leipzig" City Station had all these features - it was convincing and fascinating. The major difference between the larger 1 Gauge model and its O Scale cousin was an additional main floor and a roof cupola - each designed to simulate more height relative to the larger 1 Gauge trains the station is meant to complement. Either version was available in three configurations; as a solitary station building; as the building with a large apron and ramp in front; or as a complete set with building, apron, and a 3-track platform hall to be arranged alongside or as a terminal. The roof was elegantly decorated - first with lithographed tiles, later with stamped ones - and features a decorative turret similar in appearance to the roof line of the Märklin factory. Fine metal windows were constructed with celluloid panes.

A clock with moveable hands sits above the entrance. Subway stairs descend down into the platform level. Waiting rooms with open doors, ticket counters, and restrooms are present on the platform side. Even a letter box and a hand washing basin are included.
Initially, the stations were offered with or without interior light. The first lit versions were directly connected to the mains - electric trains were operated like that up to the mid-1920s.
Later, the lights were converted to the new 20-Volt system. In the last year of production, interior light was standard equipment. All "Leipzig" models were made from high-class materials and hand assembled.

Original catalog descriptions included: "Sterling models in durable design" and "Fine handpainting" to help reinforce the value of every single item manufactured. The 1929 price of the full-feature I Gauge version was 250 Reichsmark. This was about 1/10 of a contemporary German compact car like the Opel 4/18 (Greenback) or the BMW 3/15 (DIXI). Long considered precious, expensive and unattainable for many customers, the "Leipzig" Station was exclusive and layouts with it were respectfully admired.

After WWII, the "Leipzig" Stations became more and more a favorite of collectors. Most lucky owners refuse to part with it so locating one today in good condition is difficult. As a result, their value has steadily increased. In 2014, the return of the legendary "Leipzig" Station will find its way into collections and model railroads the world over when M. Electric Trains releases its finely detailed replica.

Sporting the looks of the original, the M. Leipzig Station carefully recreates all the details and features of the old O Gauge version No. Manufactured from tinplate construction techniques perfected by M. During it's 34 years of tinplate manufacturing experience of U. Reproductions ensures that this modern Leipzig Station will capture the awe and admiration of the original. Whether complementing an O or HO layout, the M. "Leipzig" City Station comes fully assembled and is available in English, German and French versions. It will look equally at home with M-Track and with the beautiful trains of the 1950s and 1960s as well as recent Märklin H0 replicas. The item "Marklin Tinplate by MTH No. 2036 B Leipzig Station (German) O Gauge 10-1027" is in sale since Thursday, January 17, 2019. This item is in the category "Toys & Hobbies\Model Railroads & Trains\O Scale\Parts & Accessories\Buildings, Tunnels & Bridges". The seller is "sell_sa" and is located in Fort Lauderdale, Florida. This item can be shipped worldwide.