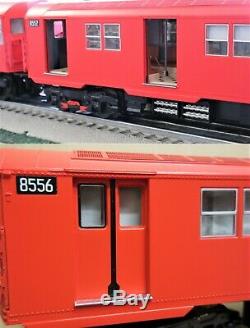 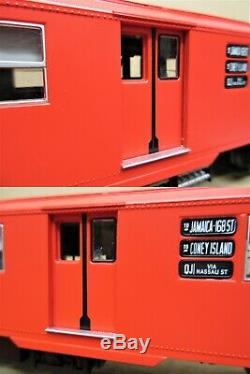 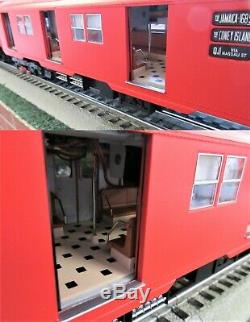 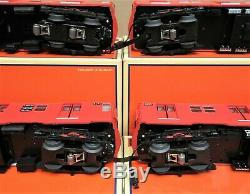 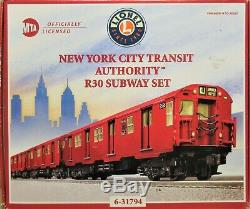 Up for sale is a. Lionel 6-31794 Legacy New York City Transit Authority R30 Subway Set O-Gauge USED. Impressive Set in Excellent Condition!
Unfortunately, some windows are loose, knocked out, and only 2/3 windows we could locate are included in the box. The entire set is short one missing window so you will need to locate one window part, if desired. All doors on both sides are tested and open perfectly. They were tested hard for an hour to ensure full functionality. There are a few minor nicks on the bodies here and there. VIDEO DEMO OF ACTUAL LISTED ITEM HERE. Wheels will show wear from heavy test run and previous use.
Box shows major shelf wear and cosmetic damage. Extra protective cushion may be added inside the foam insert to keep the item from shifting around.
Please look at the pictures to see exactly what you will receive. Milepost 38 Toy Trains / Arnie's Model Trains is the largest train center on the West Coast! Located in Orange County, CA. Open 6 Days a week! Largest selection of N, HO, S, O, & G Scales on the West Coast at DISCOUNT PRICES!!

Lionel scale subway cars are back again in all new class and paint scheme! Class R30 subway cars dressed in vibrant red. Entering service in 1961, R30 subway cars operated mainly in the Eastern Division of the New York City Transit Author­ity line. The last of them were retired in 1993 after thirty solid years of service.

Dressed originally in Kale green, the R30s were repainted red in the late 1960s. A common route for the R30 class was on the designated QJ line which included travel between Queens 168th Street and Coney Island. Lionels R30 sub­way cars have opening doors and authentic subway sounds. Listen for the operator announcing true-to-life stops along the route. They also feature a wealth of realistic detail, decoration, and lighting features both inside the cars and out.