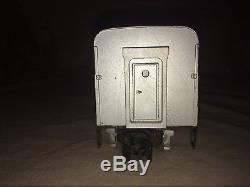 This is a very, very RARE American Flyer item, the 480 Silver Flash B unit. It did not come as part of a set. It was a special order item from AC Gilbert. There are re-pro's/copies but this one is vintage.
It is in such nice CONDITION because it was stored in its first box since 1955. Photos are part of the description. This 480 item shows very little signs of usage. There are small places of box-ware. The diesel horn button is included.

One reason that this piece looks so good is that it has been stored in its vintage box (see separate sale for vintage box). In 1953, the original set came with the 477 powered A unit and 478, a dummy A and a set of three passenger cars. The locos and cars were all finished in chrome. In 54 the finish was changed to silver paint partly because some of the chrome was chipping off. In 1955 The numbers were changed from 477 & 478 to 479 & 480.

However the 479 set did not include a dummy A or B unit. The set included a powered A unit and three passenger cars. The new silver loco 479 had single motor as power. This B 480 unit did not match the chrome of the 477-478 chrome finished team. This may be another reason my #480 B unit is in such great shape. It is very clean with what looks to be mostly box-wear. It may not be mint but it certainly looks to be factory new. It was in 1955 that three different dummy B units were offered as add-on accessories. The Comet B unit, #467, the Rocket B unit, 476, and the Silver Flash B unit, #480. The price to own this item is above the book value from 2007 provided by D Doyle. The vintage box is not listed separately by Doyle. As a train dealer I have discovered that Greenberg's Price Guides have a section pricing only boxes for Lionel Trains. "Kleer Paks" seem to be different, however. I will advise you if I have an unforeseen delay. The item "EXTREMELY Rare 1955 Vintage American Flyer S gauge, 480 B unit SILVER FLASH" is in sale since Tuesday, November 27, 2018. This item is in the category "Toys & Hobbies\Model Railroads & Trains\S Scale\Other S Scale". The seller is "trainsbuyer7" and is located in Stevens, Pennsylvania. This item can be shipped to United States.