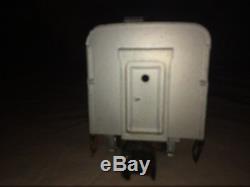 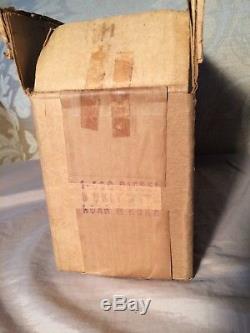 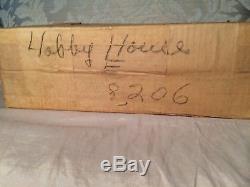 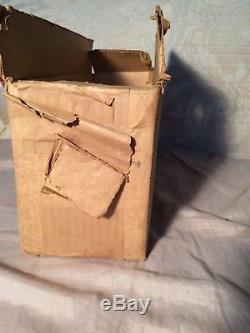 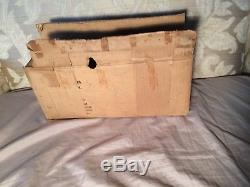 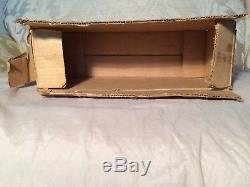 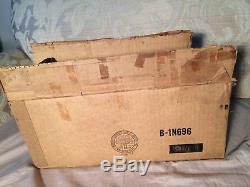 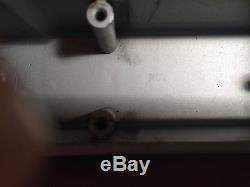 This is a very, very RARE American Flyer item, the 480 Silver Flash B unit. It did not come as part of a set. It was a special order item from AC Gilbert.
There are re-pro's/copies but this one is vintage. It is in such nice CONDITION because it was stored in its first box since 1955. Photos are part of the description.
This 480 B unit item shows very little signs of usage. There are small places of box-ware. The diesel horn button is included. The Diesel ROAR works well.

This B unit also bears the correct date stamp inside the loco shell. One reason that this piece looks so good is that it has been stored in its vintage box (see below for the included sale for the vintage box). In 1953, the original set came with the 477 powered A unit and 478, a dummy B and a set of three passenger cars. The locos and cars were all finished in chrome.

In'54 the finish was changed to silver paint partly because some of the chrome was chipping off. In 1955 The numbers were changed from 477 & 478 to 479 & 480. However, the 479 set did not include a dummy A or B unit. The set included a powered A unit and three passenger cars.
The new silver loco 479 had a single motor as power. This silver B 480 unit did not match the chrome of the 477-478 chrome finished team. This may be another reason my #480 B unit is in such great shape.
It is very clean with what looks to be mostly box-wear. It may not be mint but it certainly looks to have slight playware. It was in 1955 that three different dummy B units were offered as add-on accessories.
The Comet B unit, 467, the Rocket B unit, 476, and the Silver Flash B unit, 480. The price to own this item is above the book value from 2007 provided by D Doyle, which is ten years out of date. The vintage box is not listed separately by Doyle.
As a train dealer I have discovered that Greenberg's Price Guides have a section pricing only boxes for Lionel Trains. "Kleer Paks" seem to be different, however. The 480 B unit Box.
This is a very rare surviving relic from 1955. It provided housing for my American Flyer S gauge B unit #480. Those of you who read D. Doyle's AF book must remember that his prices are from 2007 or 2006 (going by Library of Congress number). Anyway, We all know that boxes are usually gotten rid of before the trains ever leave the house.
Sometimes boxes become containers for things not intended for that box. Other times, with a little imagination, boxes become a car or an airplane, or a dog house or whatever purpose they may newly serve.
Most boxes do not survive very long. I don't know why this box has "survived" as it has. This box, with a hole in the one lid flap, is not in mint condition at all. But it is a survivor because it offered protection for a prized possession, an American Flyer engine, a model diesel B unit loco 480. Someone received an AF train set likely for Christmas in 1953.

I bought the entire train collection. It had a 1953 Silver Flash, A & B diesel units and three passenger cars which were chrome plated. This set in 1954 was changed to being silver painted Catalogs of AF trains inspired many of us to ask for trainsets for XMAS. This particular item was an ad-on in 1955 to a pictured toy train outfit. The point is this: as rare as the contents of this box are, the 480 diesel B unit with roar and horn, the box is much more rare or scarce or absent than its contents.

This box is over 63 years old, and considering the use and abuse it has suffered, it is in OK shape because of the end label. The Rubber Stamped label states, 1-480 DIESEL. The photos are part of the description. The B unit is guaranteed to be 100% original and so is the box is 100% original also.

Items are from a smoke-free and pet-free environment. I will advise you if I have an unforeseen delay. The item "480 B unit Very Rare 1955 American Flyer S gauge, SILVER FLASH & original BOX" is in sale since Friday, December 21, 2018.

This item is in the category "Toys & Hobbies\Model Railroads & Trains\S Scale\Other S Scale". The seller is "trainsbuyer7" and is located in Stevens, Pennsylvania. This item can be shipped to United States.